Does Your Dog Bite? (And Other Pertinent Questions)

Written by Priority Lending Admin on March 20, 2017. Posted in General. 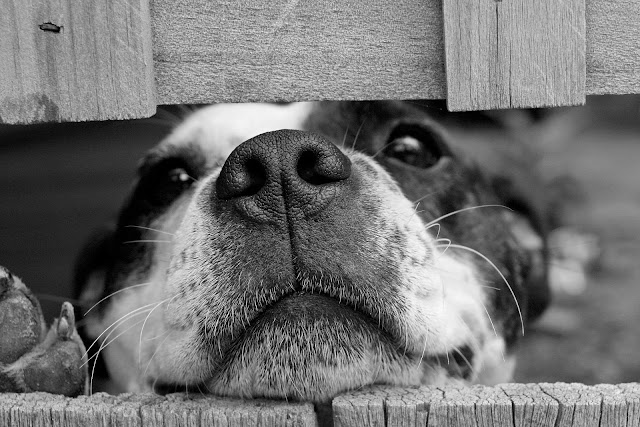 In
the final act of the movie The Pink Panther Strikes Again, Inspector Clouseau
visits a quaint country inn located in the Bavarian Alps where he and the
innkeeper use English as their common language –
the accents are cheesy, to say the least.
At any rate, as Clouseau has picked up his room key from the innkeeper
and is making his way out the door, he spies a dog lying in the doorway.  Clouseau turns to the innkeeper and asks,
“Does your dog bite?”  Taking the pipe
out of his mouth, the innkeeper gives him a very nonchalant, “No.”  Clouseau kneels down and reaches his hand out
to pet the dog while saying, “Nice doggy.”
(I’m guessing the common language between Clouseau and the dog was
English, too.)  Just as he does this, the
dog starts barking furiously and snaps his teeth onto Clouseau’s hand.  Upon recovering his hand from the dog’s jaws,
Clouseau stands upright and shoots a very stern look at the innkeeper and says,
“I thought you said your dog does not bite.”
Without skipping a beat, the innkeeper replies, “THAT is not my
dog.”  Obviously, my description of this
isn’t nearly as funny as how the scene actually plays out, but it still makes
me laugh whenever I think about it.
(Look it up on YouTube for a genuine laugh.)  Asking the wrong question or failing to ask
the right question can have consequences ranging from mild to devastating.
Prospective
buyers, when interviewing real estate agents, you shouldn’t ask closed-ended
questions –
questions that can be answered with a simple yes or no or a specific piece of
data. For example, don’t ask, “How long have you had your license?”  Data question.  The person answers, “15 years.”  If you just move on, you don’t know if in
that 15 years, he’s only sold seven houses, and all but one of them was to his
sister-in-law.  Don’t ask, “Do you have a
lot of experience working with first-time homebuyers.”  “Yes, I do.”
If you don’t ask a follow-up question, you don’t learn that the last six
buyers committed themselves to a psychiatric hospital because she couldn’t
close the deal for them.  Instead, you
need to ask questions like, “When was the last time you represented a buyer in
a bidding war, and what did you do specifically to help them win?”  You’ll quickly get a feel for whether this is
the right agent for you or not.
I
once met a veteran agent who told me that most agents don’t ask the wrong
questions –
the
right questions have been drilled into their heads to make sure they have a
serious buyer on their hands –
but he went on to say that too many agents are afraid to ask one of the most
important questions: “If we don’t find your dream house on our first day of
searching, what is that going to do to you emotionally?”  He told me that the buyers’ answers to that
simple question tells him more about who he’s dealing with and what their hot
buttons will be throughout that search than any other question or set of
questions.  Too many agents, he added,
complain that such a question is too personal and might offend the buyers.  Buying a home is VERY personal, he said –
99% of the time, it’s an emotional decision –
and you won’t offend them by trying to understand them.
On
our side of the table, mortgage folks can fail to ask the RIGHT questions.  About a year ago, a gentleman came in and
said that three other lenders had approved him for a loan of X, but he really
needed a loan of Y.  As we asked him the
standard questions, we got to the one that would have limited him at the X mark
–
the fact the other three lenders stopped him at that point told us that they
didn’t ask the next LOGICAL question.  We
asked that question, which explored more detail, and determined that he was
eligible for Y.  Happy day!
I
began this edition with a scene from a movie, so I’ll close with one: Uncle
Buck.  Miles, the nephew, barrages his
uncle with questions ranging from nose hair to his uncle’s marital status.  Uncle Buck comments that his nephew asks a
lot of questions, to which Miles responds, “I’m a kid.  That’s my job.”  In a real estate transaction, we all have a
job to do –
let’s do them well by asking the right questions!