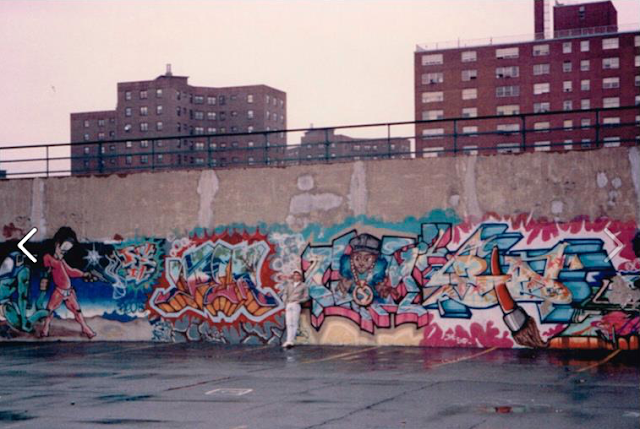 We
have a man who works in our office –
we’ll call him Rex –
who lived in New York City in the late 1980s.
This was a time before Times Square was populated by the Lego and
M&M stores and taking the subway to The Bronx to watch a Yankees game was a
bit like walking through the woods with nothing on but underwear made of meat
(and not in a Lady-Gaga-performance kind of way).  Oddly enough, he loved that time!  He’s told us a few stories of his New York
days, and I’ll share two of them with you here.
One
winter afternoon in Astoria (Queens), Rex was standing on the corner waiting to
cross the street and catch his bus to his apartment in Bushwick
(Brooklyn).  The light was red, so as he
was waiting for it to turn green, he noticed a large truck idling at the light
beside him, and it sounded like it was on its last leg.  As the light turned green and he proceeded to
cross the street, the truck entered the intersection and left Rex in a dense
cloud of black fog from its exhaust pipe.
As the air cleared, Rex looked up at the truck speeding away and noticed
that it had a sign on its tailgate: Environmental Protection Agency!
Another
winter, he found himself in the Washington Heights section of Manhattan in the
shadow of the George Washington Bridge.
As he was walking along, minding his own business, a young drug dealer –
probably about 14 years old –
sidled up and started walking beside him.
The young “distributor rep” looked up at Rex, smiled, and said, “Excuse
me, sir.  You wanna
buy some crack?”  Rex kept walking,
smiled back, and kindly said, “No, thank you.”
Not one to give up on a possible sale, the young resident of Washington
Heights countered with, “It’s good sh*t,”
and he flashed an extra bright smile.
Without skipping a beat, Rex painted a semi-serious look on his face and
asked the young man, “Isn’t that an oxymoron?”
The young man stopped dead in his tracks, and as Rex kept on walking, he
could hear the young man saying to himself, “An oxy what?”  I have a point, I promise.
We
recently met a relatively new real estate agent who told us about his plans to
become the area’s leading luxury property agent.  As our meeting progressed, he told us about a
particular listing he just obtained –
it was just north of $1 million.  Kudos
to him!  After he told us about this
million-dollar listing and everything he was going to do to market it, we
simply gave him a couple of pieces of information to think about and consider:
(1) a home in that price range and area of town, on average, takes a
considerably longer time to market and sell (that wasn’t our opinion; it was
based on MLS data we had readily at hand that we showed him); (2) homes in the
$200-400K range are selling almost immediately, and homes in the $400-600K
range are selling in just a few months.
(Again, we used data from MLS to share these points with him.)  Then, we simply explained that he could sell
a couple of $200-400K homes and a couple of $400-600K homes in a quarter to
half the time it will take to market and sell ONE million-dollar home –
and his cumulative commissions would be the same.  Light-bulb moment for our new real estate
agent friend!
Whether
you’re a real estate agent or a seller/buyer of real estate, it’s always a good
idea to seek out someone who’s just as passionate about your goals but isn’t
passionately invested in your plans because they’ll be able to see things you
may not see –
their “cooler heads” will be able to gather data and insights to share with you
that you might have missed in your excitement.
The driver of the EPA truck probably couldn’t care less he/she was
spewing toxic clouds, but someone in the EPA who is less concerned about
getting the truck from Point A to Point B is going to see to it that it gets
fixed (I would hope).  It’s with that
same hope that the young man in Washington Heights gave up dealing drugs,
bought a dictionary, and looked up the word “oxymoron” –
perhaps now he’s a tenured professor at Columbia University, all because Rex
took a moment to say something to him.