On Life’s Journey, Did You Over Pack?

Written by Priority Lending Admin on February 14, 2017. Posted in General. 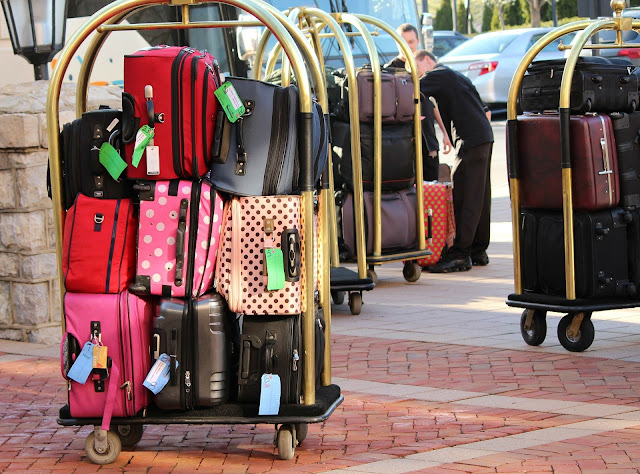 If
you’ve never heard of the comedian Brian Regan, go to YouTube and look him
up.  I’d say I’ll wait, but you might be
a while –
he’s got a lot of great stuff that’s absolutely hilarious.  As a stand-up comedian, he travels a lot, so
it was inevitable that the airline would lose his bags at some point.  When they did, he decided to tell the story
as part of his act –
I’ll do my best to recreate it here:
“Oh, hi.
Yeah, my bag?  I gave it to you a
few hours ago, and now it’s not spinning around on that thing over there, so I
was wondering what sort of hell on earth I should prepare for.”  The clerk at the desk said, “Yeah, if it
doesn’t come in on this afternoon’s flight, it’ll come in on tomorrow morning’s
flight, and we’ll deliver it to your hotel.
But don’t worry, we have this for you.”
He reached under the counter and produced a small see-through bag with a
zipper on top with a label that read “essentials kit”.  “Oh, THESE are the ESSENTIALS? Then I over
packed.  I thought I needed all those
things I meticulously put in my suitcase.
I stand corrected.”  If that was
really the essentials, then you would never need to go to work again.  “Whatever happened to Harry?”  “Oh, he doesn’t need us.  He happened upon an ‘essentials kit.’  He opened it up, and it was filled with food,
shelter, and love.”
Obviously,
his delivery makes this far more hilarious that just reading it, but I still
think it’s funny, and it leads me to my point for this week’s column.  In the real estate and mortgage world, many
people do “over pack” and overlook that there are just a few essentials to
getting them into a home – quite often, they over pack with excuses.  Someone once taught me that, if you take away
someone’s excuses, you help them see their goals more clearly.  Here are three excuses people use –
quite often, it’s subconscious –
when they choose to continue renting rather than purchasing a home, a goal they
should be able to see more clearly:
1.     “I
can’t get together enough money for a down payment because rent is so high
and/or I have student loans.”  These are
reasonable and viable factors to consider, but I’ll ask you this: how much do
you THINK you need?  I’m willing to bet
your answer will range between 10-20% of the price of a home.  There are so many down-payment-assistance
programs and loan products requiring only 1% or 3% of the purchase price, that
I could bore you for hours –
let’s not.  Suffice it to say, Excuse #1
is dead.
2.     “I
can’t get a loan because I don’t have a ‘conventional’ job.”  Sure, in 1965 when all the groovy cats were
looking to buy houses, most of them worked a 40-hour-a-week job for “the man”
and could qualify.  We’re in the 21st
century, folks!  “Conventional”
jobs are quickly becoming the minority, and smart lenders are LOOKING for ways
to lend to people like you.  Don’t go
your local bank: they’re still stuck in the old days with shag carpet from
1965.  Enough said: Excuse #2 is dead.
3.     “There
aren’t any available homes.”  While I’ll
agree with you that inventory levels are low, they’re not at zero.  Now,
when you say there are no houses, that statement usually ends with “that have
the chef’s kitchen I want” or “with the party patio that my friend has.”  Continuing to rent isn’t going to make those
dream houses appear –
in fact, that will push them farther out of reach.  With values continuing to increase, if you
buy now and wait a bit, your house will most likely appreciate to the point
that you can pull out some of that equity and put in that chef’s kitchen or
party patio.  Excuse #3 is dead.
Remember,
take away the excuses so you can see your goals more clearly.  That’s the “essentials kit” you need –
I can’t help you, though, if your airline loses your bags.