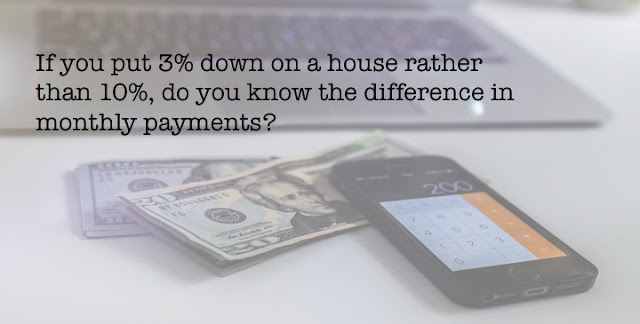 There’s an old song by The Clash called “Should I Stay or Should I Go?” that has a very fitting line for so many in the potential homebuyers pool, and it goes like this: “This indecision’s bugging me.”  I’m not talking about indecision that results when you’re faced with having to choose between going to Olive Garden for the endless-salad-and-breadsticks combo or Red Robin for the bottomless basket of French Fries.  Nor am I talking about an indecision that occurs because you’re forced to choose between a mid-century modern or a rambling ranch home.
The indecision that so many potential homebuyers are experiencing is the result of just not knowing the down-and-dirty facts – and while they are hemming and hawing, they continue to rent and home prices continue to increase.  Let me give you an example:
On a house that costs $200,000, do you know the difference between the monthly payment if you put 3% down versus 10% down on a 30-year mortgage?  Before you answer that, though, what’s the difference in dollars between 3% of $200,000 and 10% of $200,000?  That’s pretty major, right?  A 3% down payment is $6,000, while a 10% down payment is $20,000 – a spread of $14,000!  So with THAT BIG of a difference between the down payment amounts, there should be an equally considerable difference between the monthly payments, right?  The difference is – are you sitting down for this – only $167!  I’m not trying to say that $167 is chump change – it certainly isn’t, especially when you’re on a budget – but it’s probably easier to find a way to come up with that $167 difference each month than it is to come up with $14,000 in one shot.
The average first-time homebuyer stays in that first home less than seven years.  In that time, the homeowner is not going to see a significant difference in the grand scheme of things between having put down 3% or 10%.  However, during that time, the $14,000 the homeowner DIDN’T have to spend by putting down 3% can be used for a lot of other things – no indecision there, right?
So, if you’re in the potential homebuyers pool, take one last lap for old times’ sake, climb out, towel off, and come talk to us.  If you’re wearing a Speedo (gentlemen), we’ll ask that you change clothes, too, before you come visit us.